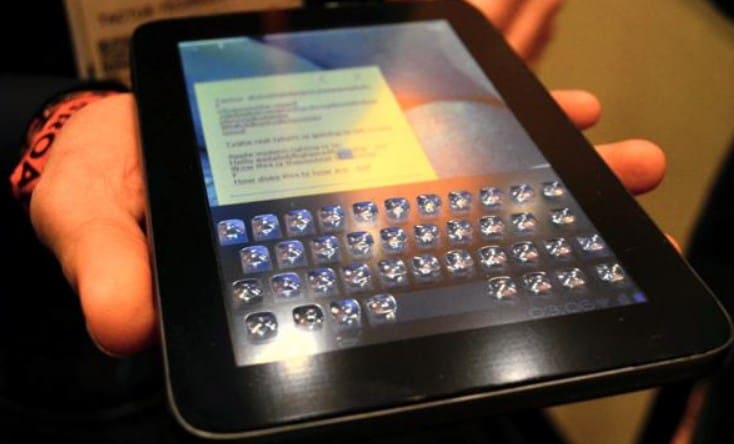 Last year in one of our article we had mentioned about an innovative technology named as Dynamic Touchscreen or also called as Tactile Touchscreen invented from Tactus Technology an US based company .
Back then the technology was still in developing stage. But this year the company has already integrated it into a tablet and showcased it in the CES gadget show which was held in Las Vegas last month. The below video shows the demo of this technology.

For the people who have never heard of this before, Tactile technology is nothing but the rise of physical transparent buttons on a touchscreen surface on demand. It simply means the small buttons rise up from the screen only when the user enables it else the buttons immerse into the screen, becoming invisible and leaving the flat display alone for maximum viewing angle. It gives some kind of magic in hands like experience.
Tactus uses the fluid mechanism in the touchscreen panel to achieve this extra ordinary functionality. Currently the company hasn’t mentioned about any partners who will be using this in their smartphones or tablets but the company is quiet optimistic of bringing this haptic touchscreen technology not only in the Mobile Industry but also in Automobiles and other Consumer Electronics devices. Will be covering more on this small bumpy buttons technology in coming days.