Skip to content
You are here:HomeMobiles Nokia 105 releasing in India in April for Rs 1200 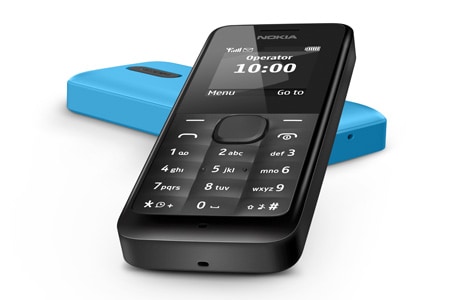 Nokia India is all set to release its one of the most cheapest handset Nokia 105 from its current portfolio this month in India. The price of this device is expected to be around Rs 1200 ($22, Euro17).
Nokia 105 was first unveiled at MWC 2013 where it made a huge buzz for its lowest price tag. This handset is basically targeted for the customers who are yet to own a mobile phone for the first time. It will be released in India, China, Indonesia, Vietnam, Egypt, Nigeria and other African countries.

Some rumors say that Nokia will stop the production of black and white phones in future which means Nokia 105 could be your last chance to grab a entry level handset.
Looking at the specs sheet the Nokia 105 comes with a massive 35 days battery backup (while on standby), 1.45 inch display, dustproof keypad, FM Radio and a speaking alarm clock. The phone will be first available in Andra Pradesh and later it will be released in other states of the country. It will be available in two colors – Cyan and Black.

Features and specifications of Nokia 105