Skip to content
You are here:HomeComparisons Difference between Intex Aqua 5.0 and Spice Stellar Horizon Mi-500 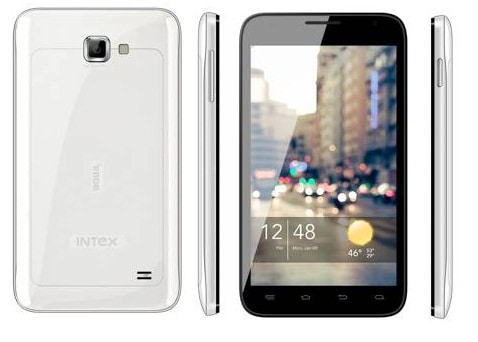 Currently in Indian cell phone market there are quiet a few five inch smartphones released from the Indian brands. The list includes iBall Andi 5C, Zync Cloud Z5, Micromax Canvas II A110, Intex Aqua 5.0 and Spice Stellar Horizon Mi-500. All the listed smartphones at a top level have similar features and come with more or less similar price.
Out of this list here is a quick comparison on the features and specifications of the two Indian made 5 inch Android smartphones the Aqua 5.0 from Intex and the Stellar Horizon MI 500 from Spice Mobility which were released in the last quarter of 2012.
Both the dual-sim handsets which can also be called as Phablets fall in the low cost mobile phone category.
With the name of Intex Aqua one may perhaps get a doubt whether the smartphone is waterproof or not, but the Intex’s Aqua series is just a brand name and the cell phone released under this label until now are not water resistant.
On the other hand Spice Stellar series have a special feature, all the Stellar smartphones comes with Pre-installed NETQIN antivirus software to prevent any malware attacks.
Below is the brief comparison between Intex Aqua 5.0 vs Spice Stellar Horizon Mi-500.

System:
Aqua 5.0 and Stellar Mi 500 smartphones are running on Android 4.0 Icecream sandwich operating system. Both the devices are powered by 1GHz dual-core processor for better performance throughput. But the RAM size of 512MB would fall short for such huge phones with 2 cpu cores in it. 1GB RAM would have certainly helped for any future android upgrades or perhaps helped with reliable performance while playing high graphics games. But given the fact that these phones fall in low cost section so expecting more than this would not be fair.
The user accessible internal memory capacity on both the handsets is 2GB. The memory can be expanded upto 32GB capacity using the microSD card slot. Intex Aqua 5.0 may come with a 4GB external memory card as complimentary but this is not 100% sure. Both the smartphones have dual sim slots which supports 3G WCDMA and GSM network.

Display:
The highlighted feature of Aqua 5.0 and Stellar Horizon Mi-500 is its huge 5″ capacitive touchscreen display. But for such screen size the resolution of 480 x 800 pixels would be less. Also there is no scratch resistant or IPS technology on both the displays which wouldn’t give a better viewing experience from all the angles.

Camera & Battery:
Both the handsets features 5MP autofocus camera with LED flash at the back. But the camera doesn’t support HD recording.
Aqua 5.0 has a 1.3MP front camera and a 2000mAH removable battery which would be sufficient for 1 day on normal usage where as Spice Stellar Horizon has a VGA front camera for video calling and a powerful battery of capacity 2400mAH.
In the connectivity section both the devices support 3G, EDGE/GPRS, Wi-Fi, USB and Bluetooth.

Price:
Price of Intex Aqua 5.0 in India is around Rs 9700 and price of Spice Stellar Horizon Mi500 is around Rs 11500. Both the smartphones are released in India and available in the leading stores. One can even buy them from the online retail stores.