Skip to content
You are here:HomeBrands Full Phone Specifications of CelKon A95 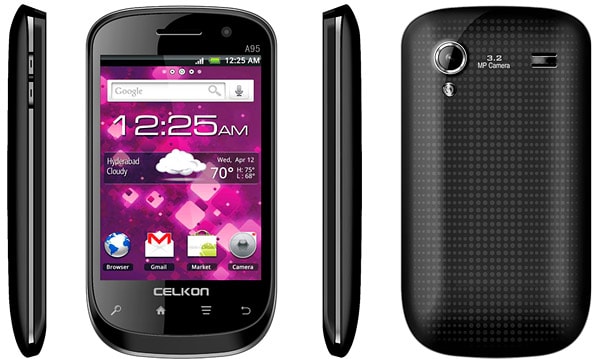 CelkonTM Mobiles, one of the Indian cell phone manufacturer has announced its two new dual-simAndroid smartphones for Indian market, Celkon A95 and Celkon A97. Both the handsets make the Celkon Mobiles as the first Handset company in India to launch its phone based on the newly developed 6575 Chipset from MediaTek. The CPU in the chipset is powered by 1GHz processor running on Android 2.3.6 Gingerbread operating system. Company has roped in cricketer Virat Kohli and the actress Tamanna as the brand ambassadors and has lined up eight more advanced smart phones in the $100-200 category to be launched over the next few weeks.

Celkon A95 has a 3.2″ capacitive touchscreen of resolution 240 x 320 pixels with multi-touch support. It supports dual-sim for GSM network and has 3G capability. Other connectivity includes Wifi, GPS, Bluetooth and MicroUSB. Celkon A95 model is officially announced on 8th June in Hyderabad and will be available by the third quarter of this year with a price tag of Rs 5299 in India.